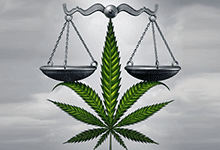 There’s still a lot of confusion as to whether dagga (cannabis) remains an illegal drug in South Africa, fuelled in part by conflicting media reports.

Here’s where we stand –